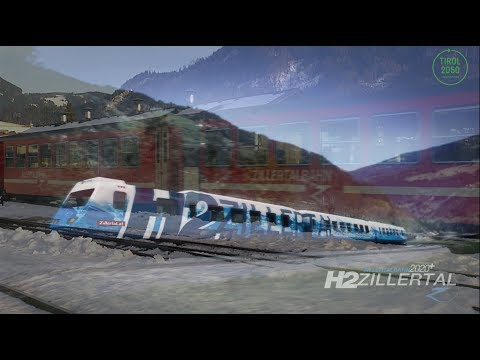 The strategy of Tyrol, becoming autonomous in matters of energy is on its way. Politics and economics are working step by step to achieve this goal. The Green Energy Center Europe in Innsbruck is a strategic partner and catalyst when it comes to using green hydrogen as a bridge for the energy turnaround. The supervisory board of the “Zillertaler Verkehrsbetriebe AG”, decided to shift to a narrow-gauge railway, the first one worldwide, which is a courageous step and a lighthouse project, showing the world that this region is not only a global brand concerning hydrogen, but also in terms of ecological energy.
Chairman of the supervisory board NR Franz Hörl: “Two years ago I took over responsibility for the “Zillertalbahn” and from the beginning there was only one thing on my mind: using electricity instead of diesel. The electrification cannot be implemented by building a conventional power line through the Zillertal-region, but by using hydrogen instead, because there are the big power plants in the tributary valleys. “Verbund” is running big power plants, so it was clear to me to accumulate this sustainable green energy in hydrogen in order to be able to use it again, whenever necessary. This has to be the technology we use in the future and we are already at the point where we can think about procurement. And that’s how it is today. Green hydrogen is produced in Mayrhofen in the Zillertal-region and provided for the refuelling of the trains. For the “Zillertaler Verkehrsbetriebe AG”, this means a conservation of 800.000l of diesel as well as a reduction of 2,2 million kg of carbon dioxide emission per year. The project should be implemented until 2022 and its aim is a noiseless and emission free regular service on the railway track between Mayrhofen and Jenbach, which is 32 km long. With that in mind, one can feel well prepared for the future.
General manager Dipl.-Ing. Helmut Schreiner: “There is a massive increase in ridership, not only in the tourist-, but also in the commuter sector. The trains will be well equipped, so that transporting skis or bikes will be no problem at all, but still, the focus is on providing a quick transfer opportunity for commuters from Mayrhofen to Jenbach and further through the Inn Valley.” The hydrogen project Zillertal, which was developed together with experts of the Green Energy Center Europe, is implemented with a lot of respect and sense of responsibility. It is also the next step for Tyrol, to use its resources optimally and develop new strategies to be able to explore new opportunities.
Vice governor Josef Geisler: “Hydrogen gives us the opportunity to model our energy supply in a decentralised way and to accumulate energy. Mobility is a perfect example to show, how hydrogen can be used in a reasonable way in the future.”At the beginning, the Green Energy Center Europe used hydrogen cars for the hydrogen highways and for establishing the first “green corridors” in Central Europe. The perfect example that using hydrogen also works in the industrial sector, is the collaboration with MPreis, an enterprise that agreed to cooperate in the context of an EU project. In Völs, Europe’s biggest electrolyser is built to transform green electricity into hydrogen. Whole Europe is watching the project. Since this plant is built under economic aspects, it can be proved, that using hydrogen instead of fossil energy is also a business case for the future. The first hydrogen discussion board 2018 in Innsbruck has shown in an impressive way, how much there is a need of this sort of new strategies.
Vice governor Ingrid Felipe: “Many conscious citizens are asking themselves, how the current situation with fossil fuels looks like and how to use alternative energy instead of diesel. It is very important that many experts on this field are gathering in Innsbruck today and exchange their experiences with hydrogen and alternative fuels.” In public transport, experiences with hydrogen-fuel-cell-busses have already been made, showing, how to adapt the vehicles for the needs of different regions. The experts of the Green Energy Center Europe need to stay on the ball to develop new strategies and projects for green industries and mobility for the future.
CTO FEN Systems Dipl.-Ing. Nikolaus Fleischhacker MSc: “The Green Energy Center Europe stands for building bridges into a future of green mobility. With our partners, which are big enterprises, industries and also startups, we want to develop and provide new solutions to a world that is dominated by oil, coal and gas and change it into a green world, powered by sun, wind and especially here in Tyrol, water.” Tyrol plays an important role in Europe in terms of strategy formation. This was confirmed in an impressive way at the first hydrogen discussion board in Innsbruck.
CEO FEN Systems, Founder Green Energy Center Europe Dr.  Ernst Fleischhacker: “It was not only a milestone for Tyrol, but also for Austria and whole Central Europe. For the first time, experts from all over Europe met and shared their experiences, especially with busses and engaged themselves in our resources management. These two different approaches meeting here in Tyrol, symbolise a milestone for Austria and Central Europe.”